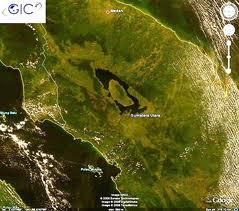 North Sumatra is a province located on the island of Sumatra, Indonesia. The province is inhabited by many ethnic groups of Malays are classified as Old and Young Malays. Original inhabitants of this province consists of ethnic Malays, Tribe Batak, Nias tribe, and the Acehnese people. Seaboard of North Sumatra, which is east and west are generally inhabited by ethnic Malays and Tribal Mandailing which is almost entirely Muslim. While in the mountains there are many Batak Tribe mostly Christian. There was also a Tribe on the islands west of Nias. The migrants who contribute to the population of this province is dominated by the Javanese people. Other tribes are Tionghoa Tribe and several other minorities.
North Sumatra province is located at 1 ° - 4 ° north latitude and 98 ° - 100 ° east longitude, land area of North Sumatra Province 71 680 km.

North Sumatra basically can be divided into:

In the middle area of Bukit Barisan Mountains province lined. In these mountains there are several highland pockets of population concentration. But the number of the most dense residential population in the eastern region of this province. The area around Lake Toba and Samosir Island is also home to residents who depend their lives to this lake.

There are 419 islands in the North Sumatra propisi. Outer islands is the island Simuk (Nias Island), and Idolatry in the straits of Sumatra island (Malacca).

Nias Islands consists of a main island of Nias island and other small islands around it. Islands off the coast of Nias is located in the west coast in the Indian Ocean. Government center is located in Gunung Sitoli.

In North Sumatra, there are currently two national parks, the Gunung Leuser National Park and the Batang Gadis National Park. According to the Decree of the Minister of Forestry, No. 44 of 2005, forest area in North Sumatra is currently 3.74212 million hectares (ha). Which consists of the Nature Reserve / Nature Conservation Area covering 477 070 ha, 1.29733 million ha of Protection Forest, Limited Production of 879 270 ha of forest, Permanent Production Forests and Forest Production of 1.03569 million hectares that can be converted to an area of 52 760 ha.

However, this figure is a de jure nature only. Because de facto, existing forest area is not that anymore. Happens a lot of damage due to encroachment and illegal logging. So far, already 206 000 ha of forest in North Sumatra has undergone a change of function. Has been transformed into plantations, transmigration. From wide, as many as 163 000 ha for plantations and transmigration areas 42 900 ha for. 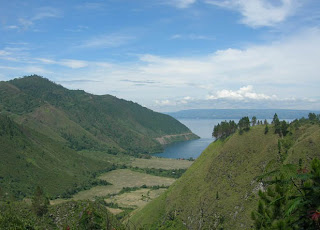 North Sumatra is a province with a multiethnic Batak, Nias, and the Malays as the indigenous people of this region. Since the opening of the tobacco plantations in East Sumatra, Dutch East Indies colonial government brought a lot of contract laborers employed in the plantation. The newcomers are mostly drawn from Javanese and hard. Spreading centers tribes in North Sumatra, as follows:

Basically, the language is widely used Indonesian. Deli majority ethnic Malays because of the proximity tells Indonesian Melayu language with the Indonesian language. Eastern coastal areas are like Bedagai Serdang, Dodek Base, Coal, shavings, and Tanjung Balai, wearing Bahasa Melayu dialect "O" as well as in Labuhan Batu with a slight difference of manner. Langkat district still uses the language of Malays Dialects "E" which is also called Maya-maya language. There are still many descendants of Javanese contract (Jadel - Java Deli), which tells the Java language.

In the urban areas, the tribe said Tionghoa common Hokkien language other than Indonesian. In the mountains, said Batak Batak language, consisting of four accents (Silindung-Humbang-Toba Samosir-). Languages spoken in the islands of Nias Nias Nias by the tribe. While the people of Western Coastal North Sumatra, as Sibolga and Central Tapanuli and Singkil and Coastal Christmas Madina use language.
Religion

The main religion in North Sumatra are:

The province is famous for its plantation area, until now, agriculture remains the belle of the provincial economy. Plantations are managed by private companies or countries. Plantation Enterprises which have their area in North Sumatra, among others, PT Nusantara Plantation II (PTPN II), PTPN III, PTPN IV.

* Area of paddy agriculture. In 2005 the total area of 807 302 hectares of crops to stay, or decrease by approximately 16 906 hectares than the area in 2004 which reached 824 208 hectares. Productivity of rice crop year 2005 can be increased to 43.49 quintals per hectare ranged from 2004 which is still 43.13 quintals per hectare, and rice fields from 24.73 quintals to 26.26 quintals per hectare. Year 2005, a surplus of rice in North Sumatra to reach 429 tons from about 2.1.27 million tons of total rice production in this area.
* Area of rubber plantations. Year 2002 the total area of rubber plantations in North Sumatra with a production of 443 743 489 491 hectare tonnes. As the year 2005, the total area of rubber decreased or stayed 477 000 hectares with a production which also fell to only 392 000 tons.
* Irrigation. Area irrigated entirely in North Sumatra covers an area of 132 254 ha 174 Irrigation Area. A total of 96 823 ha in seven Irrigation Area is critically damaged.
* Agricultural Products. North Sumatra produce rubber, cocoa, tea, palm oil, coffee, cloves, coconut, cinnamon, and tobacco. Plantations are scattered in Deli Serdang, Langkat, Simalungun, shavings, Labuhan Batu, and South Tapanuli.

These commodities have been exported to many countries and contributing huge foreign exchange for Indonesia. In addition to commodities, North Sumatra is also known as producers of horticulture commodities (vegetables and fruits); such as Citrus Medan, Deli Guava, Vegetables Cabbage, Tomato, Potato, and Carrot which is produced by Karo District, North Tapanuli Simalungun and. Horticulture products have been exported to Malaysia and Singapore.

Music is always played, tend to depend on the customary ceremonies were held, but more dominant with genderangnya. As there are a series of Coastal Ethnic musical instrument called Sikambang.
Architecture

In the field of art that stands out is the traditional house architecture which is the combination of the sculpture and the art of sculpture and crafts. Architecture of traditional houses are in various forms ornamen.Pada general shape of the building custom homes in the Batak indigenous group symbolizing "standing buffalo". This is more obvious with the roof tops adorned with a buffalo head.

The traditional house of the Batak tribes named Ruma Batak. Stand strong and majestic and many found in Samosir.

Coastal Sibolga custom house look even more majestic and more beautiful than the other traditional houses. The traditional house was still standing in the courtyard of the National Building Sibolga.
Dances

Dance is a dance usually profane association youth who danced at the shindig. Tortor have danced at a wedding. Usually danced by the attendees including the bride and also the young people. This youth dance, for example morah-morah, parakut, sipajok, patam-patam often and kebangkiung. Dance magic dance tortor nasiaran eg, single-panaluan tortor. This magical dance is usually performed with a full kekhusukan.

In addition there are also dances Batak dance Malays like Serampang XII.
Craft

Besides the architecture, arts crafts fabrics are attractive from the Batak ethnic group. Examples of these fabrics are woven and songket ulos. Batak traditional ulos cloth which is used in marriage ceremonies, funerals, establishing homes, art, etc.. Ulos fabric made of cotton or flax yarn. Ulos color is usually black, white, and reds that have a specific meaning. While other color is a symbol of the variation of life.

In the tribe there Pakpak fabrics known as topical. Oles basic color is usually brown or black and white.

Typical food in Northern Sumatra is very varied, depending on the area. Saksang and pig roast is very familiar to those who carry out or home-cooked feast.

In the land itself is dengke naniarsik Batak who is a fish that digulai without using coconut. For taste, the Batak land is a paradise for lovers of spicy food and coconut milk are also hot. PASITUAK NATONGGI or money to buy a sweet sap that is very familiar terms therein, illustrates how closely the wine or juice with their lives.
Posted by Slamet Hariyono at 9:58 AM